Another Day at DIA

Heading out to start the Tour de Kansas. Crazy to think we were just at the airport on Monday.  Not sure how Mr. B does it.

Every time we go to and from Denver International Airport (DIA), we always comment on the giant blue mustang sculpture that is displayed at the entrance. 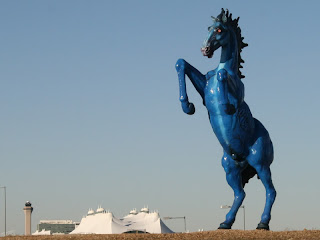 (*I found this picture on google images)

A couple of years ago the City of Denver put this monstrosity of a sculpture up to represent freedom and the strength of the American West.  What?  A giant blue mustang with his junk hanging down doesn’t bring images of freedom to mind?

I didn’t know this until recently but apparently the artist, Luis Jimenez, was killed while building the sculpture in his New Mexico studio. He was assembling the final pieces when the torso broke off, crushing him to death.

The crazy thing is that the city actually paid $656,000 to display this hideous beast. Priorities people, priorities.

Ever since its erection there has been a growing number of haters in Denver. Apparently we are not the only people that don’t appreciate giant blue mustang balls in your face. Some of the hate groups on Facebook have nickname the sculpture Beelzebub’s Blue Bay, Satan’s Stallion and Bluecifer.

Mr. B and I personally call it, The Glowing Blue Donkey.

Anyways, enough with my blue ball tangent. Mr. B and I are looking forward to heading home for the Holidays. Lot’s of eating to do and family to see.

I wonder what Santa is going to bring me?

Are You a Gleek? gearing up for the weekend

END_OF_DOCUMENT_TOKEN_TO_BE_REPLACED