posted by Lauren | 0 Comments »
Two is better then one. 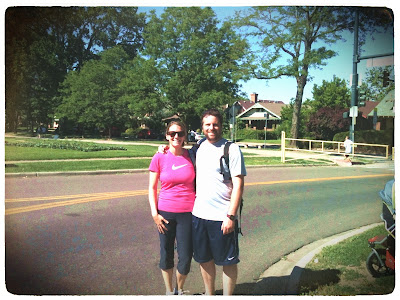 Today’s taper week run was a great example of that old saying. Mr. B returned home yesterday so the thought of running today wasn’t nearly as daunting.

This morning was a little rough. We grilled out last night and sat on the patio, drank wine and caught up with each other’s lives. There is a lot that happens in two weeks.

Poor Mr. B was exhausted and dehydrated when the alarm went off at 6:30am. Even though he got to sleep in an hour later the silent fatigue of travel caught up to him. So I was the cheerleader for this run.

We decided to do the same route as I did last weekend and meet up with Listy to run around Wash Park.  I kind of forgot that it was up hill the entire way and Mr. B had only been running on flat ground for two weeks. Whoops.

We made it up the hill, right around 2.8 miles we grabbed some cliff shots and then regained our composure and finally met up with Listy and Chance.

We ran 3.5 more miles with Listy around Wash Park and I got to push Chance in the BOB stroller again. I have no idea why I find it so cool to run with the stroller. Probably because the BOB is not a “normal” stroller, it has off road capabilities. Sa-weet. 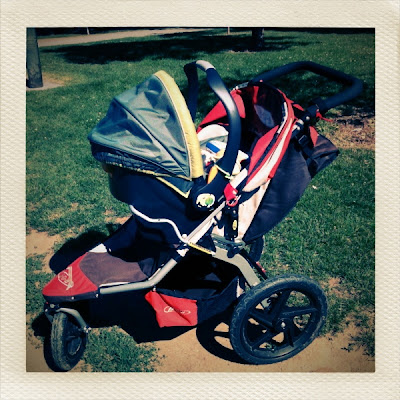 Thanks for running with us Listy! 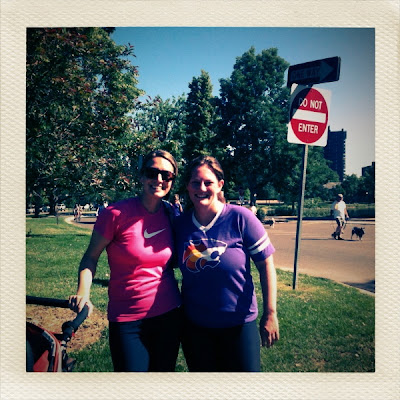 Afterwards we headed to Mona’s for breakfast. I am definitely starting to love morning runs!
SUNDAY:
Me: 7 miles
Mr. B: 7 miles
Total Miles Week Three:
Me: 18 miles
Mr. B:17 miles
REFLECTION:
Me: Runny buddy = success. Also, I did order a half size larger in my running shoe because my feet are swelling pretty bad. Have I mentioned that I lost a toenail during my first marathon? Yep. Swollen feet are not cool people!
Mr. B (his voice):  This is my first real attempt at distance running so I have a lot to learn, but a couple of weeks alone while training goes a long way.  I am now a firm believer in the need to run often and early, in form over speed, and in relaxation over perspiration.  Running long distance 4 to 5 times a week is hard work no matter how yo cut it.  Much like life in general, there are good days and bad days, but paying close attention to why a certain body part hurts and correcting the motion that is causing the pain is much more important than just pushing through it.  We have a long road ahead of us but with a little luck and a lot of attention to detail I’m sure we can do it. On a side note, its good to be home!