What images come to mind when you think of life below the Mason-Dixon line?

When I think of the South, all sorts of things come to mind. Debutante balls, plantations with wrap-around porches, ice-cold coke, chicken and waffles, and Robert E. Lee. 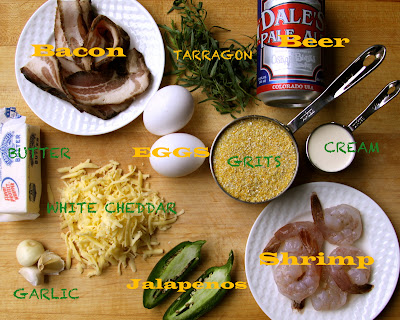 I have always been intrigued by the people, the food, and the slow-paced lifestyle. I guess, in a way, apart of me has always wanted to be a Southerner. Even though I have Yankee DNA, I was fortunate enough to marry a man that comes from a Southern background.

See, Mr. B’s mother is a Rutledge. For those of you that aren’t familiar with that name, let me give you a quick history lesson: Hey, don’t give me that look! Trust me this is epic.

Ya’ll know the story of our founding fathers and how the Declaration of Independence was formed, blah, blah. Well, what if I told you that Edward Rutledge (Mr. B’s great-great-great-grandfather) was the youngest signer of that Declaration at the age of 39? Crazy, right? When his mother told me this story, I about died. Really? No joke? No, really? That is awesome! The only cool family story that I know is that my Grandpa Chuck had dinner with Harry S. Truman and my Grandpa Ray met Babe Ruth. Not bad, I suppose.

But seriously, the Declaration of Independence? Get out of town! 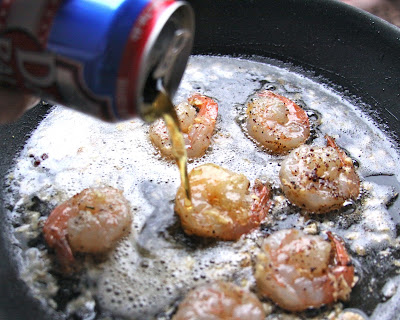 As the story sank in, I began to feel connected to his family’s history. So today I thought I would pay homage to the South and Mr. B’s family’s history, and make a true Southern dish: Shrimp and Grits.

Now, I have to tell you, I’ve never made grits. Gasp! This was not a staple of the Wurth family growing up. In fact, I don’t think I had even tasted grits until I met Mr. B. Sigh….what would I do without this man?

Back to the grits. 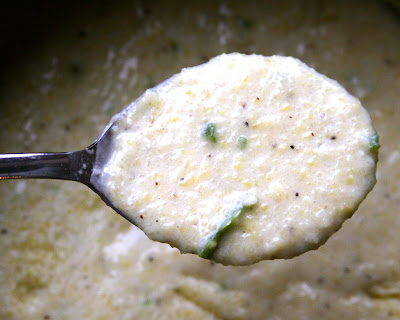 This recipe is very simple and quick. It’s great for a weeknight dinner or impromptu brunch gathering. The key to cooking grits is to not use those of the “instant” variety. You have to give them time to absorb the water and thicken up. Then you had the butter and cream, and start doing the happy dance.

Once you’ve made the grits, just saute some shrimp, cook the bacon and assemble.

Wash it down with a tall glass of sweet tea, while you tell Scarlett O’Hara to get her act together. 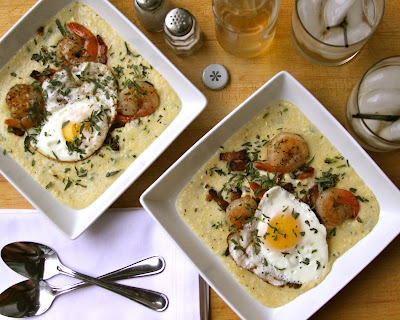 Directions:
for the grits:
In large saucepan, bring water to a simmer. Pour in grits and begin to whisk. Simmer until grits begin to thicken. Continue cooking, stir often, and if need be add 1/4 cup of water to keep from getting to thick. Probably will take about an 1 hour to cook. Stir in cheese, butter, jalapeno, and cream. Season with salt and pepper. Keep warm.

for the shrimp:
Heat a skillet to medium high heat and cook delicious bacon until crispy. Add garlic and tablespoon butter. Add shrimp. Then add beer and chicken stock. Once shrimp are cooked (2 minutes), remove skillet from and set aside. In the same pan, cook some sunny-side up eggs!
Divide grits and shrimp mixture between four bowls. Top with egg. Sprinkle tarragon over.