birthday bash at the beach

posted by Lauren | 3 Comments »
Ahhhh…..sleep.
How I love you.
Let me count the ways. 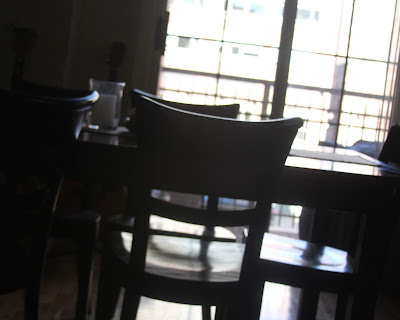 I don’t know about you, but that extra hour of sleep put an extra pep in my step today. I woke up right on cue at 9:00am, but loved the fact that it was only 8am.

Hmm…what to do with the day?

Let’s get our ski on at A-Basin.

After a quick breakfast of toast and eggs, Mr. B and I loaded up the Jeep and headed over to AC’s crib to pick up him and Megan. We were meeting the York’s and the Westerman’s at A-Basin to celebrate AC and Mr. B’s birthdays. 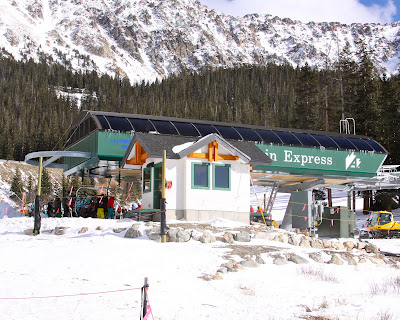 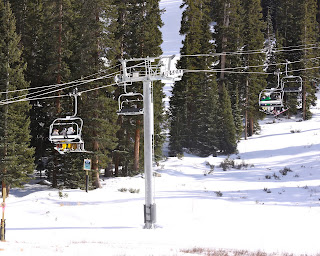 We arrived at A-Basin around 1:00pm. Good thing because the high was only twenty-degrees! Yikes. Even with the sun out, it was a tad-bit-nipply.

Since AC is the ultimate salesman, ordinary parking was not an option. He decided that we should all park in the reserved parking spots right by the lift because they weren’t being used. Usually these spots are $150 and you have to reserve them well in advance, not for AC. We rolled up with no problems. I swear AC could sell gum to a kid with Lockjaw.

We decided to snack before hitting the slopes. From fried chicken to seven layer dip to cheese and crackers to PBR, we had all of our culinary bases covered. 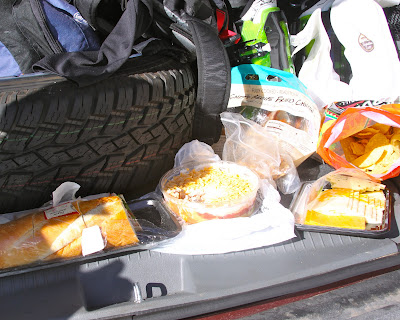 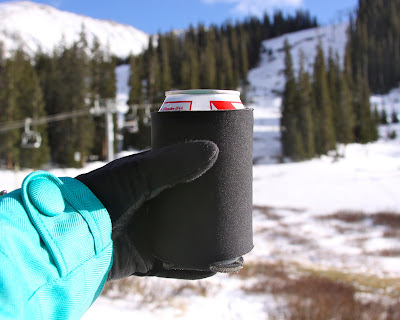 Once snack time was over, we strolled over to lift. The wind was a little brisk going up, but once we arrived at the top, we just boogied down. 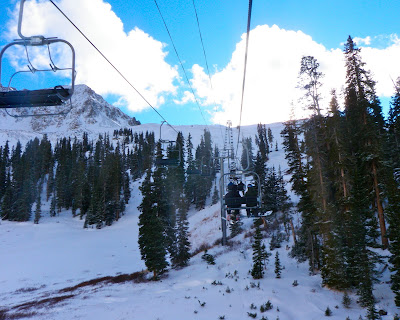 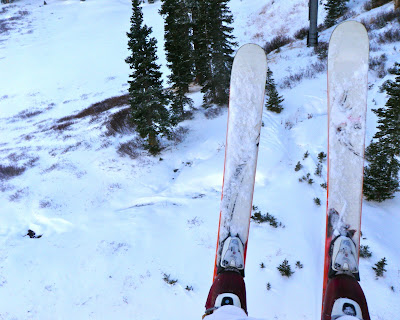 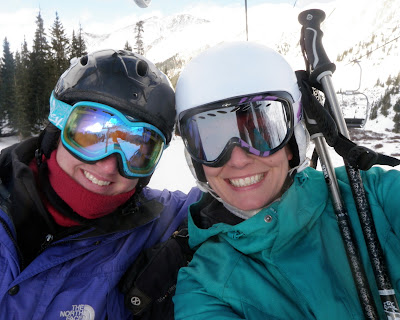 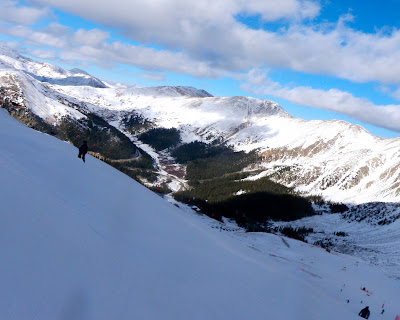 We only did one run because the snow was terrible (it was pretty much ice all the way down). Eh, what can you do? This is typical early season conditions. That’s why you drink beer and play games on the beach!
Corn hole anybody? 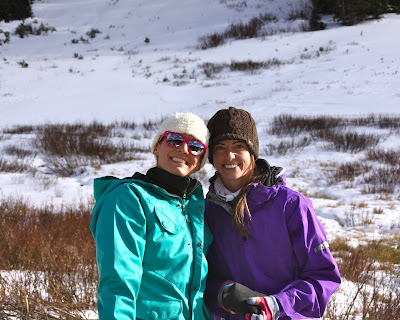 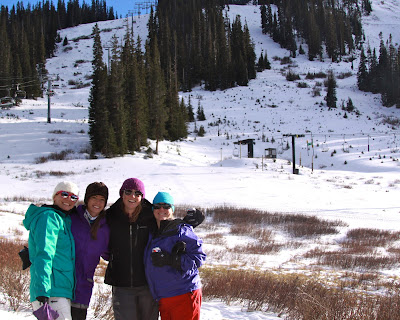 Ian was a riot all day.
He loved playing in the snow. Ahh…to be a kid again. 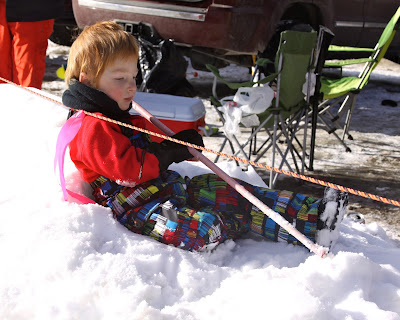 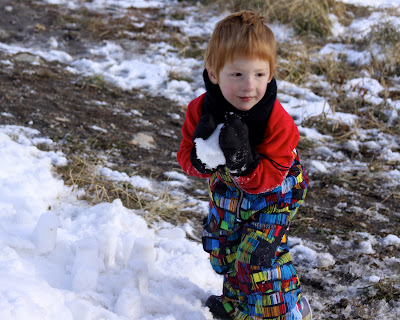 We hung out for another hour, and then broke into the bubbly to cheers to the birthday boys. 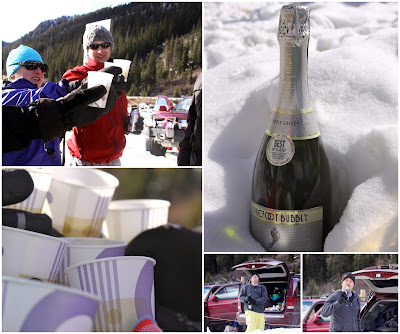 Happy Birthday AC and Mr. B!!
Amy Jo, Ian, and Eric headed back to Basalt, while the rest of us decided to stop in Georgetown for a little grub.
Georgetown is a small, mountain town about 15 minutes from the Eisenhower tunnel. There’s not much to see or do there. To be honest, it’s a little creep town.
As we were walking around downtown trying to find a place to eat, it was an absolute ghost town (cue…Friday the 13th theme music). The first restaurant we checked out closed at 5pm. The second restaurant looked like something out of a horror movie. The third, and final restaurant was at least open and had beer.
The Raven Hill Mining Company Restaurant was a little sketch. 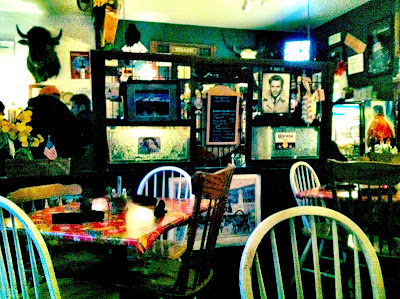 When Mr. B and I first walked in we immediately thought of Robert Irvine and the show, Restaurant Impossible. The carpet was dirty and there was a lot of wall decor. Robert would not be happy!
Well, as they say, never judge a book by it’s cover. Even thought the restaurant ascetic was less than desirable, our waitress was very sweet, and I am pretty sure the restaurant was about to close as soon as we walked in.
The table split the brie and trout appetizer, which were both quiet tasty.
For dinner, Mr. B and I ended up splitting the buffalo burger and a side salad. I was an idiot and order the burger medium-rare. Ooops. I am not kidding when I say the burger may have been alive when it was brought to the table. 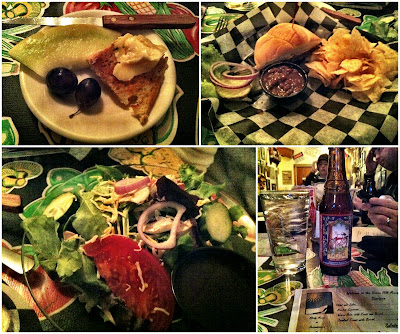 Mr. B and AC both ordered a birthday cobbler.
You should have seen Mr.B’s face after he ate that bad boy. He looked at me and said that he may go into cardiac arrest from all the sugar.
Once we were done with dinner, we headed back to Denver.
Cheers to another great day at the beach, and to the birthday boys!
Thankful Challenge: Day 6
Today I am thankful for little mountain towns because they remind me to keep things simple.
P.S. Lehman’s, we missed you!!!
Celebrations, Denver Village, High Country, Thankful Challenge, Travel
3 Comments »