How was your day?

This morning, as I was sipping my piping HOT cup of coffee, I stared at this postcard I received from my Uncle Michael a few weeks ago.

On the postcard he had written:

“Hi! Good luck with this recipe.” 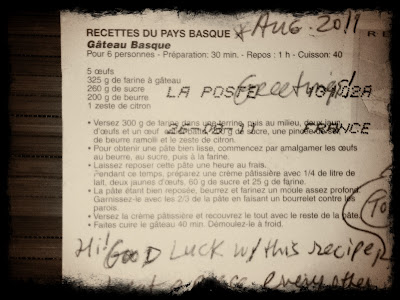 Hmm….maybe I should have mentioned to him in a previous passing that I am the only one out of my siblings that doesn’t speak French or any other foreign language. Eh, details.

As I skimmed through the French recipe (hoping there was a slight chance I knew one word), I quickly realized that I was in waaaay over my head. So I did what anyone would do in this day of age and downloaded the Google Translator app. Brilliant.

Here are a few of the words I was able to translate before my carpel tunnel flared up:

Even though I will be translating this recipe from now until Christmas, it was fun to feel like a Parisian for a moment. Thanks Michael for the cake recipe!

Remember on Sunday when Mr. B woke up with a sore throat and major drainage? Well, I was all sunshine and lollipops today up until lunch and then, BAM! My throat started to feel scratchy and my head began to throb. Oh hell-to-the-no! There is no way that I am getting sick four days before this race.

So I sprinted across the street to purchase ZICAM spray from Rite Aid and grabbed a green tea from Starbucks next door. 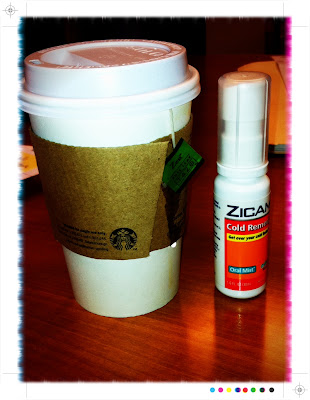 I sprayed my throat with ZICAM like it was my job. Hmmm. That doesn’t sound right. But you get the picture. I first heard of ZICAM when I lived in Chicago. Since the weather was pretty much horrible nine months out of the year, people at work were constantly sick. I kid you not, everyone had a bottle of this stuff on their desk. Jar of pencils, stapler, scotch tape….ZICAM.

Anyways, in between my spraying escapades, I did manage to sneak in a quick shot of my outfit today. 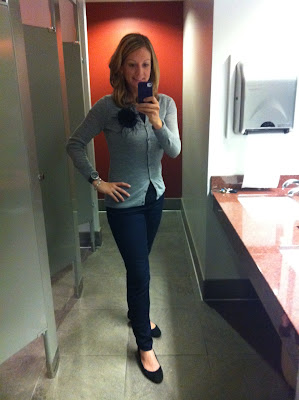 After work I headed home to rest before boot camp. I honestly would have rather played with a large mountain lion then do lunges and squats. But I am glad I went because now I feel a zillion times better.

Have a smashing night!

gotta get down on friday