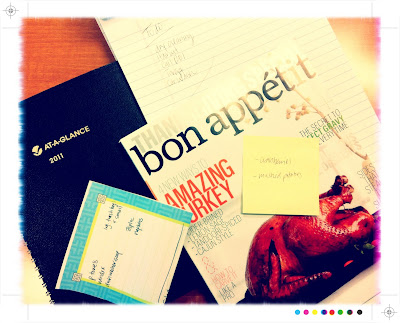 Sometimes I get excited and think I have mad rhyming skills like Dr. Seuss. Sadly, I drew the short straw when it comes to poetic finesse.  I think that’s why I was so obsessed with Dr. Seuss as a kid. I loved every book from The Cat in The Hat to One Fish, Two Fish. But my favorite was the story about The Star Bellied Sneetches…

That Dr. Seuss was one smart cookie. Who else could have taught our youth about the wrongs of materialism and discrimination through giant, yellow looking birds? Completely brilliant if you ask me.

After this weekend, I was pretty sure that I gave my to-do list a giant Chuck Norris karate chop, but apparently, I only have begun to scratch the surface (like Mr. Burns style).

But not too fear. All I need to do is remain focused and march ahead.

Oh, and speaking of marching, check out my new boots that came in the mail from Uncle Nordies last week! They are from “The Dutchess” herself, Fergie. I am absolutely obsessed with these boots. The color is the perfect grey…not to dark, not to light. And the heel cover, forget.about.it. 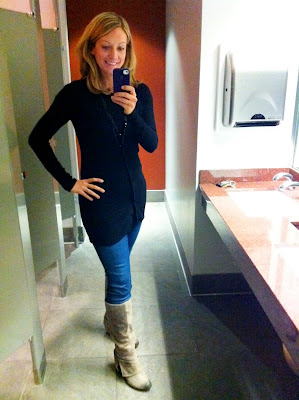 *disclaimer…I wore this outfit last week.
Black sweater: Express
Black top: Banana Republic
Jewelry: Urban Outfitters
Skinny jeans: B.P. Nordstroms
Boots: Uncle Nordies
Around 4pm, I received a text from Mr. B:
“Es no bueno. I’m heading home.”
For those of you that don’t know, Mr. B always works late because the majority of the people he deals with are on central time. Well, once it turns five o’clock here, then he knows he can get work done without being interrupted. Engineers, gotta love them.
Anyways, when I read the text I immediately freaked out and called him because I knew something was wrong.  He sounded like death when he answered. I told him that I would come home immediately and not go for a run in the park. With a pitiful voice he told me to go ahead and run so he could take a nice long nap.
I decided he was right, and went to Wash Park while he slept. After my run, I called him to see if he needed anything.  The only word he could say, “thermometer.” I told him I would stop by the grocery store to pick up some chicken noodle soup as well as a thermometer.
Okay, I am just going to state for the record, I haven’t even seen a thermometer since I was twelve years old and on my death bed with pneumonia. Is that weird? Needless to say I was a little clueless as to what I was actually looking for.
As I was searching the grocery store isle, I had a total blonde moment and kept looking for the glass kind. You know, the one filled with mercury that our parents would shove in our mouths as kids and sometimes, dare I say, the tookus. Gasp.
Well, after about five minutes of searching, the light bulb came on. Duh? There’s a reason why every box has the words “does not contain mercury” written across the front in giant letters. Plus, every option was electronic, not glass. Hello, earth to Lauren. I can be such a bone head.
I arrived home, put some groceries away, and then tended to the ill the husband.
First up, temperature check.
For only being $7, this bad boy gave an accurate reading in less then ten seconds. The only bad thing, Mr. B was burning up. His temp, 101 degrees. Yikes. 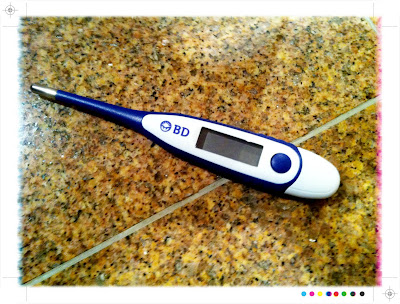 Sadly Mr. B didn’t have an appetite.
I just made sure he kept pushing fluids and applied a cold rag to his head.
Poor guy, I hate when he is sick:(
Thankful Challenge: Day 14
Today I am thankful for advancements in technology. Thermometers without mercury are a true blessing. Amen.
Fashion, Thankful Challenge
3 Comments »